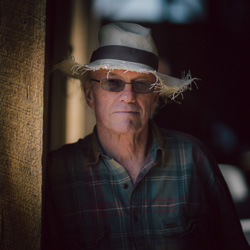 La Sagrada Familia is a large Roman Catholic basilica in Barcelona, Spain, that has been under construction since 1882. In 1883 Antoni Gaudi (known as God’s Architect) took over, and in 1884 he was appointed Architect Director. He changed the design drastically; it is considered to be Art Nouveau style, with influences of Spanish Late Gothic, and Catalan Modernism. The columns, towers, vaults, windows and sculpture are based on natural forms, including trees, shells, tortoises and wings. Gaudi and several masons worked on the church until his death in 1926 when La Sagrada Familia was only about 25% complete. Work progressed slowly until recently.

From Jon, “When my wife Mary and I visited La Sagrada Familia in 2012, we were surprised by hundreds of workmen with high-tech equipment speeding its completion. When I looked up into the vaults over the nave, I broke down and wept. It was one of the most worshipful moments I’ve ever experienced! My painting shows scaffolding dimly in the distance, but the Art Nouveau columns and vaults in the foreground are completed.

The painting, Exaltation One, is an expression of my experience. 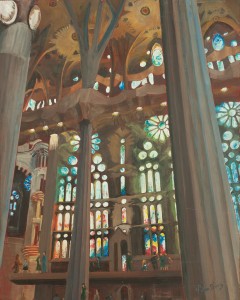 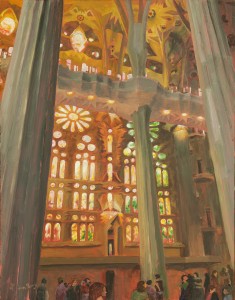 Expected to be completed in 2026, La Familia Sagrada was declared a UNESCO World Heritage Site and Pope Benedict XVI proclaimed it a minor basilica in 2010.

Copyright on all images on this website is owned by the artist. Please contact our artists if you wish to use their images.